Fun Facts About Hole In Ones

Fun Facts About Hole In Ones

What are the Chances of Making a Hole in One?

Hole in One Facts: The First Ever

Imagine the community’s surprise when the very first hole in one ever was recorded! The first ace was made by Tom Morris in the 1868 British Open.

What is the Longest Hole in One Ever?

Hole in One on a Par Five

While the majority of hole in ones are made on par 3 holes, which have a shorter distance to the hole, it is possible, but rare, to get a hole in one on a par four or par five. If you do manage to hit an ace on par-5, you’ll get what is known as a condor or a triple eagle! Shaun Lynch achieved a hole in one on a par 5 with a 3-iron in 1995. The distance he needed to cover was 496 yards. Lynch’s golf ball cleared a 20-foot-high hedge before rolling down a slope and into the hole.

Hole in One Facts: Oldest and Youngest Golfers Recorded

While some golfers play for years without shooting a hole in one, others manage to make it at an early age. In fact, the youngest golfer to get a hole in one is Jake Paine, who was just three years old. Paine shot a hole in one, just barely out of diapers, on a 65 yard hole. The oldest player to make a hole in one? Harold Stilson, a 101 year old Boca Raton resident, who shot 108 yard 16th hole at Deerfield Country Club in 2001.

Who has the Most Career Hole in Ones?

Many golfers go without hitting a hole in one ever in their lifetime. That’s not the case for Norman Manley of California who holds the record for most hole in ones. Manley has shot 59 hole in ones over his lifetime.

Most hole in ones are made with a 7, 8, or 9 iron, so if you’d like to up your odd of shooting an ace, we recommend tying it with one of these irons.

Who Has the Most Hole in Ones in the PGA?

How Many Hole In Ones Does Tiger Woods Have?

Tiger woods, the most famous golfer of all time, shot his first hole in one at just six years old. He has recorded 3 all-time hole in ones during his PGA career.

Hole in One Facts about Women

Did you know? According to the National Hole in One Registry, 16% of holes in one are made by women. The average age of women who shoot an ace is 55 and they play for 15 years on average before shooting a hole in one. For women, the average hole length is 111 yards.

Knowing these hole in one facts will hopefully make you appreciate your own game! As you can see, making a hole in one, while difficult, is definitely not impossible. With a lot of skill, and a little bit of luck, you too can shoot an ace! If you are involved with organizing or sponsoring a charity golf tournament, then you should consider a hole in one contest to attract more participants. We offer prizes that are affordable and can fit every budget. Call us today to speak with a Golf Excitement Specialist to learn more about our hole in one coverage. 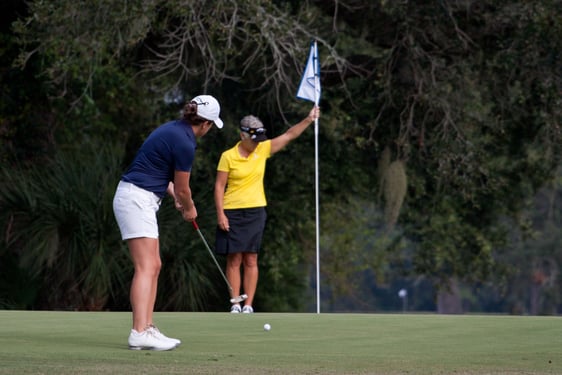 Why You Should Gear Your Next Tournament Towards Ladies

Long gone are they days that Golf stands for “Gentlemen Only, Ladies Forbidden.” While golf was[…]

Odds Of Making A Hole In One

A hole in one is the perfect combination of luck and skill. You need both to shoot a perfect[…]

How would you celebrate winning a hole in one contest? Give the crowd a big fist pump? Would you[…]